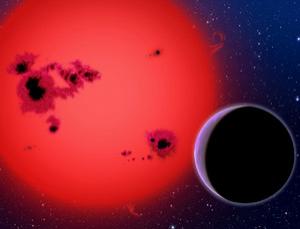 A PLANET orbiting a nearby star is the best candidate yet for an alien world made almost entirely of liquid water. The discovery suggest that "super-Earths" are a much more diverse bunch than we suspected.

Super-Earths weigh up to 10 times as much as our planet. They may be among the most common types of planet in the Milky Way, and some could turn out to be cosy places for life. Around a dozen have been found, but for the most part, astronomers have been unable to pin down their properties because they don't pass in front of, or transit, their host stars as seen from Earth. Transits reveal a planet's size, allowing its density and composition to be inferred.

Related: Earth in comparison to other objects in space »

. Broiled by its host star, the planet may be a rocky body covered in pools of lava on the side that always faces the star.

Now, astronomers have found the second transiting super-Earth around a nearby red dwarf. Called GJ 1214b, it is about 19 times as large as Earth by volume but only 6.6 times as massive. Such an object could be composed primarily of water - likely in liquid form - with a modest amount of rocky material at its core. Calculations show it must also have an atmosphere . Its proximity to the red dwarf, however, makes it slightly too hot to be habitable (Nature, DOI: 10.1038/nature08679).

The differences between the two planets suggest that super-Earths form in many different ways, says David Charbonneau of Harvard University, who led the team that discovered GJ 1214b. If it is a water world, "it could be the first clear example of a whole new population of exoplanets", says Sara Seager of the Massachusetts Institute of Technology.

Theoretical models by Seager and student Leslie Rogers show that such a planet could form if it began life much farther from its star. The lower temperatures there would have led to an ice-rock composition similar to Jupiter's moon Ganymede. Later, as the planet shifted into a tighter orbit, it would become a water world with a steamy atmosphere. Other possibilities include a small rocky planet with an implausibly vast atmosphere possibly replenished by volcanic activity.

Related : Should we remodel Mars to replace earth?»

Charbonneau has applied to use the Hubble Space Telescope to measure the composition of the planet's atmosphere, which could help rule out one or more of the models. "The presence of an atmosphere is our best chance to find out more about this object," he says.