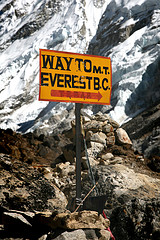 Ignoring protests by Maoists that crippled government offices nationwide on Thursday, Nepal’s PM Madhav Kumar Nepal and 23 ministers
as well as civil servants and nearly 100 journalists flew to northern Lukla district, considered the gateway to Mount Everest, to hold a sensational cabinet meeting in the lap of the world’s highest mountain on Friday.

The premier, who recovered from a debilitating bout of influenza last month, is being accompanied by medical teams and dozens of oxygen cylinders to prevent high altitude sicknesses, especially breathing problems in the rarified air above 5000m.


The cabinet held a historic meeting on Friday morning at Gorak Shep, a plateau at 5262m, under the shadow of the 8848m Everest.

The ‘Everest’ meet is a bid to draw the world’s eye to the dangers Nepal faces due to global warming. The 20-minute cabinet meeting will endorse what Nepal will say at the Copenhagen meet starting from December 7 as well as declare over 2000 sq km of land between Everest and Langtang, renowned for its rich biodiversi, a national conservation area.

Under water (or) Mount everest?