And this is another moment for which we are proud to be an Indian. Indians are generally perceived by Americans in the world of Information Technology, as a community that would love to work for peanuts and lacks innovation. But Pranav Mistry, a 28-year-old indian and a MIT researcher has broken this myth as he is one of the main persons behind the innovation of the year 2009 (as awarded by Popular Science). He is also awarded as one of the young innovators under 35 for the year 2009, by the prestigious Technology Review sponsored by MIT. 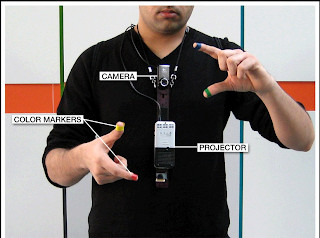 This innovative device is named as SixthSense and also called as Wear your World (WyW) by geeks. This aims to create a seamless interface between information and reality. Already this is hailed as yet another giant leap for mankind.


Pranav Mistry, hails from Palanpur, Gujarat. He finished his schooling at Vividhlaxmi Vidyamandir in Palanpur and engineering degree in Gujarat University. IIT, Bombay moulded him further before joins MIT. Now he is a researsch student in MIT, Massachusetts. He has also taken internship at Microsoft. “My parents were a big influence,” says Pranav. His father, Kirti Mistry, is an architect.

This is the brief given about SixthSense in pranav’s website :


'SixthSense' is a wearable gestural interface that augments the physical world around us with digital information and lets us use natural hand gestures to interact with that information.


We've evolved over millions of years to sense the world around us. When we encounter something, someone or some place, we use our five natural senses to perceive information about it; that information helps us make decisions and chose the right actions to take. But arguably the most useful information that can help us make the right decision is not naturally perceivable with our five senses, namely the data, information and knowledge that mankind has accumulated about everything and which is increasingly all available online. Although the miniaturization of computing devices allows us to carry computers in our pockets, keeping us continually connected to the digital world, there is no link between our digital devices and our interactions with the physical world. Information is confined traditionally on paper or digitally on a screen. SixthSense bridges this gap, bringing intangible, digital information out into the tangible world, and allowing us to interact with this information via natural hand gestures. ‘SixthSense’ frees information from its confines by seamlessly integrating it with reality, and thus making the entire world your computer.

The SixthSense prototype is comprised of a pocket projector, a mirror and a camera. The hardware components are coupled in a pendant like mobile wearable device. Both the projector and the camera are connected to the mobile computing device in the user’s pocket. The projector projects visual information enabling surfaces, walls and physical objects around us to be used as interfaces; while the camera recognizes and tracks user's hand gestures and physical objects using computer-vision based techniques. The software program processes the video stream data captured by the camera and tracks the locations of the colored markers (visual tracking fiducials) at the tip of the user’s fingers using simple computer-vision techniques. The movements and arrangements of these fiducials are interpreted into gestures that act as interaction instructions for the projected application interfaces. The maximum number of tracked fingers is only constrained by the number of unique fiducials, thus SixthSense also supports multi-touch and multi-user interaction.

The SixthSense prototype implements several applications that demonstrate the usefulness, viability and flexibility of the system. The map application lets the user navigate a map displayed on a nearby surface using hand gestures, similar to gestures supported by Multi-Touch based systems, letting the user zoom in, zoom out or pan using intuitive hand movements. The drawing application lets the user draw on any surface by tracking the fingertip movements of the user’s index finger. SixthSense also recognizes user’s freehand gestures (postures). For example, the SixthSense system implements a gestural camera that takes photos of the scene the user is looking at by detecting the ‘framing’ gesture. The user can stop by any surface or wall and flick through the photos he/she has taken. SixthSense also lets the user draw icons or symbols in the air using the movement of the index finger and recognizes those symbols as interaction instructions. For example, drawing a magnifying glass symbol takes the user to the map application or drawing an ‘@’ symbol lets the user check his mail. The SixthSense system also augments physical objects the user is interacting with by projecting more information about these objects projected on them. For example, a newspaper can show live video news or dynamic information can be provided on a regular piece of paper. The gesture of drawing a circle on the user’s wrist projects an analog watch.