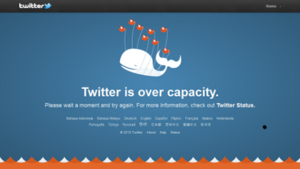 Twitter, the popular but money-losing microblogging service, is hiring engineers and specialists who can help turn it into a money-maker.
The 2-1/2-year-old Internet start-up, whose short text messages or "tweets" have become a global social phenomenon, is building up a team focused on generating revenue with a new range of yet-to-be launched products, judging by job postings on the company's website.
Among the 26 job openings listed on Twitter's site, four are specifically identified as being devoted to "monetization." Striking licensing deals are key responsibilities for two other jobs.
"Twitter is looking for new members of our technical staff to work on cutting edge monetization projects," several of the postings said.
The move to invest in such projects signals that making money is becoming a bigger priority at Twitter, as it seeks to evolve from being one of the Web's fastest-growing social media firms into a self-sustaining online business.
"The company has crossed into the phase where monetization matters. They're ramping it up," said a source close to Twitter who did not wish to speak on the record about its finances.
A Twitter spokesperson said co-founder Biz Stone was not immediately available for comment. The company has about 120 employees, she said.
Tweets, which are limited to 140 characters, have grown into an established communications medium that has played a key role in world events such as the post-election protests in Iran last summer.
"They know they're here for the long term now, so they need to turn on these monetization engines," said Altimeter Group analyst Jeremiah Owyang.
Twitter, a privately held company, does not report earnings, but its website says: "While our business model is in a research phase, we spend more money than we make."
The company spokesperson did not confirm if that is still accurate.
Twitter struck deals in October -- widely reported to total $25 million -- to license its data feed to Google Inc and Microsoft Corp, allowing allowing tweets to appear within search results on the companies' Internet search engines.
The job postings make it clear that generating revenue beyond the licensing deals is one of the 2010 priorities for Twitter, said Altimeter's Owyang.
Twitter, which recently moved into a larger office space in San Francisco, had 19.4 million unique visitors to its U.S. website in November, according to comScore, up sharply from the 1.5 million visitors a year earlier. Many industry watchers believe the actual number of worldwide Twitter users is much higher, since many people access the service through third-party applications instead of the website.
In September, Twitter raised $100 million in a move that valued the company at $1 billion, according to a person familiar with the matter, from backers including mutual fund giant T. Rowe Price and private equity firm Insight Venture Partners.
Twitter executives have said in the past that the company is interested in offering premium services, such as analytic tools for certain customers, and that it was exploring ways to integrate advertising into the service.
According to the job postings, the company is seeking engineers to build out the infrastructure and front-end features to support monetization systems that include "customer applications and reporting."
A posting for a product marketing manager for monetization said the person would focus on "enhancing business users' understanding of the value of Twitter."
Credits: Reuters