What is google buzz?


Google has never managed to create a successful social network. Orkut's success is limited to Brazil and India, iGoogle's latest update was a let down and Google Friend Connect is still in its infancy.

In 2007, Gmail's code included some details about a feature that showed updates from your contacts. Google intended to create activity streams and share them with your friends. That feature wasn't ready to be launched, but Google unveiled the first piece of the puzzle: unified profiles.

Interestingly, in 2007 four ex-Googlers launched FriendFeed, a service that allowed you to share interesting pages with your friends and use them as the starting point for a meaningful conversation. FriendFeed was acquired by Facebook last year. 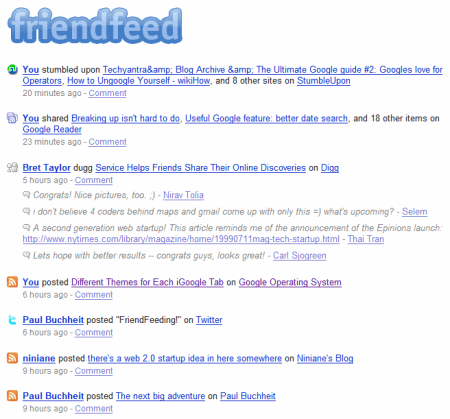 It took Google more than two years to launch a product for sharing and discussing ideas with your friends. It's called Google Buzz and it's integrated with many Google services, including Gmail and Google Maps.

"Buzz lets you share updates, photos, links, and pretty much anything else you'd like with your Gmail contacts; it's an easy way to follow your friends, too. When you click Buzz in your Gmail account, you'll see the stream of posts from people you're following, and a box for you to post your updates," explains a help article. 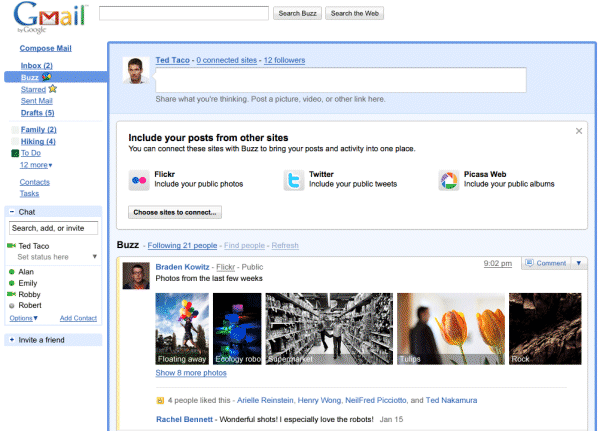 "There's a FriendFeed in my Gmail," commented Paul Buchheit, the ex-Googler who created Gmail and co-founded FriendFeed.

Google Buzz will be added to your Gmail account in the coming days, but Gmail is just one of the interfaces that will integrate Google Buzz. You can already try Google Buzzon your mobile phone by visiting buzz.google.com if you have an iPhone or an Android phone. 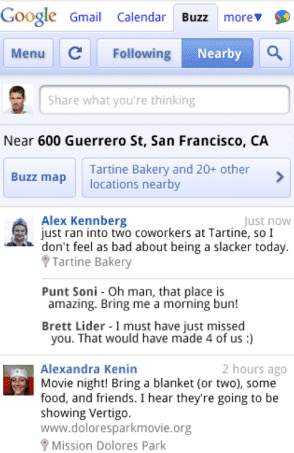 "We focused on making the sharing experience really rich by integrating photos, videos, and links. No more fuzzy little pictures: Buzz makes it easy to quickly flip through photos and experience them the way they were meant to be seen: big and full-resolution. And videos play inline so you can watch them without opening a new window. You can choose to share publicly with the world or privately to a small group of friends each time you post," informs Gmail's blog.