How old is the average Twitter or Facebook user? What about all the other social network sites, like MySpace, LinkedIn, and so on? How is age distributed across the millions and millions of social network users out there?


Full list of sites in this study: Facebook, LinkedIn, MySpace, Twitter, Slashdot, Reddit, Digg,Delicious, StumbleUpon, FriendFeed, Last.fm, Friendster, LiveJournal, Hi5, Tagged, Ning, Xanga,Classmates.com, Bebo.
To get consistent age data for the various sites we used site demographics information for the United States gathered from Google’s Ad Planner service and then did some additional calculations to get all the data we needed. 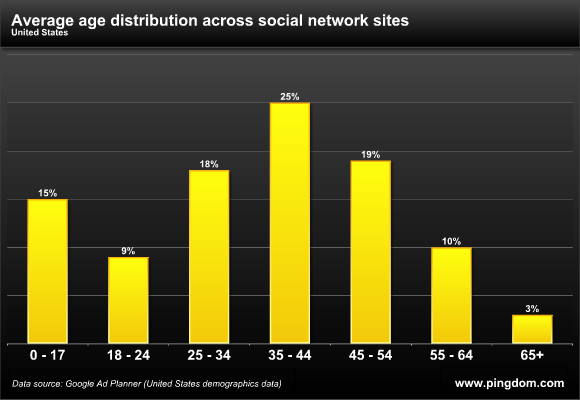 A full 25% of the users on these sites are aged 35 to 44, which in other words is the age group that dominates the social media sphere. Only 3% are aged 65 or older.
That was the age distribution when looking at these 19 sites together. When looking at individual social network sites, the differences are significant, as you will see below.

Here below you can examine the age distribution for each of the 19 social network sites we included in this study. The list has been sorted by the average user age per site (see further down for that), with the “youngest” site showing at the top and the “oldest” at the bottom. 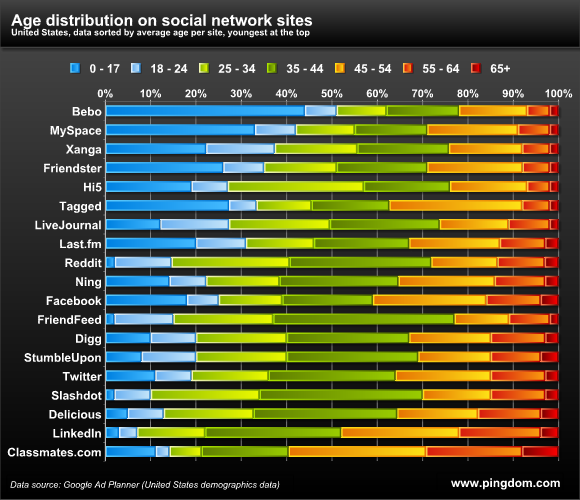 Some observations on age distribution:

Most of the social networks we included are dominated by the age group 35-44, which was apparent in the first chart in this article. This group has become the most “social” age group out there. This is the generation of people who were in their 20s as the Web took off in the mid ‘90s.
If we look at which age groups are the largest for each site, we get the following distribution:
It’s a bit surprising that not one single site had the age group 18 – 24 as its largest, but that can be explained by this interval being a bit smaller than the other ones (it spans seven years, not 10 as most of the others). That the two oldest age groups don’t top any of the sites probably doesn’t surprise anyone, though.

As we promised in the introduction, we have calculated an estimate of the average age for each of the social network sites included in this study. The result is here below. 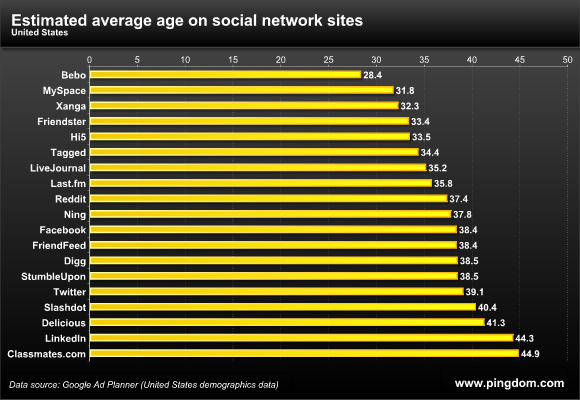 On the social web, age is a factor

Although we can’t say how this will change over time, at the moment the older generations are for one reason or another (tech savvy, interest, etc.) not using social networking sites to a large extent. This probably reflects general internet usage, but we suspect the difference is enhanced when it comes to the social media sphere where site usage tends to be more frequent and time-consuming than usual.
It is also noteworthy that social media isn’t dominated by the youngest, often most tech-savvy generations, but rather by what has to be referred to as middle-aged people (although at the younger end of that spectrum).