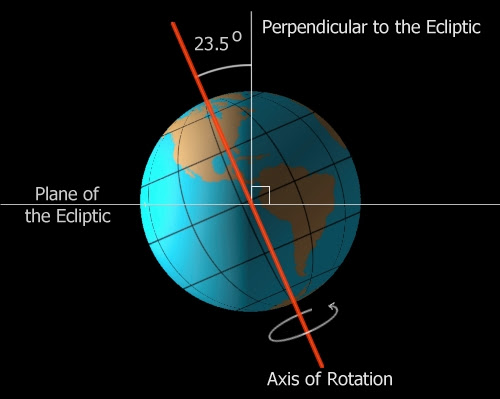 Pictures of widespread devastation leave no doubt: Last month's 8.8 magnitude earthquake in coastal Chile was strong. How strong? NASA scientists say it might have shifted the axis of Earth itself.
"If our calculations are correct, the quake moved Earth's figure axis by about 3 inches (8 cm)," says geophysicist Richard Gross of the Jet Propulsion Laboratory in Pasadena, California.


You might think you would have noticed the Earth suddenly tilting 3 inches. But that's not how the "figure axis" works. "The figure axis defines not how Earth is tilted, but rather how it is balanced," says Gross.

Consider the following:
Earth is not a perfect sphere. Continents and oceans are distributed unevenly around the planet. There's more land in the north, more water in the south, a great ocean in the west, and so on. As a result of these asymmetries, Earth slowly wobbles as it spins. The figure axis is Earth's axis of mass balance, and the spin axis wobbles around it.
"The Chilean quake shifted enough material to change the mass balance of our entire planet," Gross says.

A shifting figure axis is nothing new. On its own, the figure axis moves about 10 centimeters per year as a result of "Ice Age rebound." After the last great glacial period some 11,000 years ago, many heavy ice sheets disappeared. This unloaded the crust and mantle of the Earth, allowing the planet to relax or "rebound" back into a more spherical shape. The rebounding process is still underway and so the figure axis naturally moves.
On Feb. 27, 2010, the Chilean quake may have moved the figure axis as much in a matter of minutes as it normally moves in a whole year. It was a truly seismic shift—no pun intended.
So far, however, it's all calculation and speculation. "We haven't actually measured the shift," says Gross. "But I intend to give it a try."

The key is GPS. "Using a global network of GPS receivers, we can monitor the rotation of Earth with high precision," he says. "Changes in Earth's spin and the orientation of Earth's axes affect [the phase and timing of] signals we get from the satellites in Earth orbit."
GPS is already used to monitor seasonal changes in Earth's spin. It turns out that tides, winds, ocean currents, and circulation patterns in Earth's molten core modulate Earth's rotation on a regular basis. For instance, a typical day in January is about 1 millisecond longer than a typical day in June. The roughly six-month variation is driven mainly by seasonal winds; there are also changes on time scales of weeks, years, decades and centuries.

Earthquakes throw a "spike" into GPS signals, which Gross believes he can find.
"I have to take the GPS Earth rotation measurements and subtract the effects of tides, winds and ocean currents," he explains. "Then the earthquake should stand out."
Recent news reports have focused on Earth's length of day, noting that the Chilean earthquake might have shortened days by as much as 1.26 microseconds out of 24 hours. That's true. But it's also negligible compared to the normal effect of wind and tides, which can lengthen or shorten days a thousand times more than earthquakes can.

The real news, as Gross sees it, is the possible shift in Earth's figure axis. He has a very "JPL perspective" on the issue: "The antennas we use to track spacecraft en route to Mars and elsewhere are located on Earth. If our tracking platform shifts, we need to know about it."


No one has ever measured a shift in Earth's axis due to an earthquake before. Back in 2004, Gross looked for a shift from the magnitude 9.1 earthquake in Sumatra, but failed to find a signal. The Sumatra quake was less effective in altering Earth's figure axis because of its location near the equator and the orientation of the underlying fault. The Chilean quake, albeit weaker, may have produced a bigger shift.
The stage is set for discovery. "Computing power is at an all-time high. Our models of tides, winds and ocean currents have never been better. And the orientation of the Chilean fault favors a stronger signal."


Studies Upon The Inclination Of The Earth's Axis (1876)

In a few months Gross hopes to have the answer. Stay tuned.