A galaxy 10bn light years away 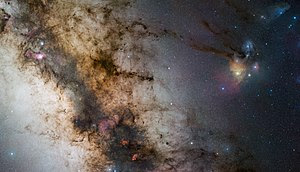 Image via Wikipedia
A team of scientists from the UK and the US has discovered a galaxy far away from us which is churning out stars 250 times faster than our Milky Way. The discovery of the galaxy, about 10 billion light years away from the earth, will help researchers understand how the Milky Way was formed.
Galaxy SMM J2135- 0102 has four distinct star- forming regions, each of which is 100 times brighter than Milky Way locations such as the Orion Nebula.

The team which discovered the galaxy was led by scientists from the UK's Durham University.


>The Big Short: Inside the Doomsday Machine

It also included researchers from European Southern University and the Massachusetts based Harvard- Smithsonian Center for Astrophysics." The new galaxy is forming stars at about 250 suns per year. Our Milky Way is forming about two suns per year," lead scientist Mark Swinbank of Durham University said. Because of the time it takes light to reach the earth, the scientists observed the galaxy as it would have appeared 10 billion years ago - just three billion years after the Big Bang.
It was Milky Way- sized at the time. But today, 10 billion years later, it would have grown into a giant elliptical galaxy much more massive than the Milky Way." When we look at the stars in the Milky Way, we find that most are about 10 billion years old. So, to understand how the Milky Way was formed, we must look back to these times. In this study, we have done just that," Swinbank said. "The main result of our study is that we have located four individual star- forming regions.
Each of these regions is forming stars much more rapidly than we would expect, given their sizes. In essence, the regions are much more efficient at forming stars than we typically see in the local universe," he said. The findings indicate star formation was more vigorous in the early universe. The paper was published on Sunday in the science journal Nature.
Reproduced From Mail Today. Copyright 2010. MTNPL. All rights reserved.