Home » technology » Where do you find the world’s fastest supercomputers?

Where do you find the world’s fastest supercomputers?

Supercomputers. There probably isn’t a tech geek out there who doesn’t find them intriguing. Huge, hulking computers with performance that’s ages ahead of what we have on our desktops. They are the most powerful computing devices on the planet.

But where in the world do we find these supercomputers? Where are the fastest ones located? Which countries have the most of them? Read on to find out

(Fun trivia #1: The top right image is a Connection Machine 5, one of the coolest-looking supercomputers of all time. It’s from the early ‘90s and was featured in the movie Jurassic Park. Unfortunately, they are no longer in use.)

Location of the 10 fastest supercomputers

It turns out that eight of the ten fastest supercomputers are in the United States. The other two are located in Germany and China. 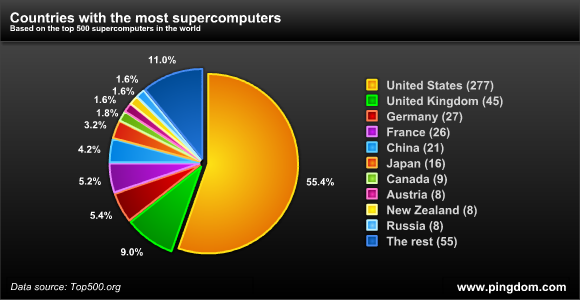 Another observation here is that the top ten countries hold 89% of the top 500 supercomputers in the world.
Us being Swedes, we would have loved seeing Sweden make it into this top ten list.With seven supercomputers, Sweden comes in at number 11.

(Fun trivia #2: Seven of New Zealand’s eight supercomputers belong to Weta Digital, Peter Jackson’s visual effects company. Creating visual effects for movies like the Lord of the Rings trilogy, King Kong, Avatar, and more, they apparently need a ton of number-crunching power. With all the business he’s bringing into New Zealand, we wouldn’t be surprised if Peter Jackson is crowned King of Wellington any day now.)

Where are the fastest supercomputers if you don’t look at countries, but at regions instead?
Granted, we know already that North America will have the biggest piece of the pie since the United States has so many supercomputers, but it’s interesting to see how the other regions of the world are doing. 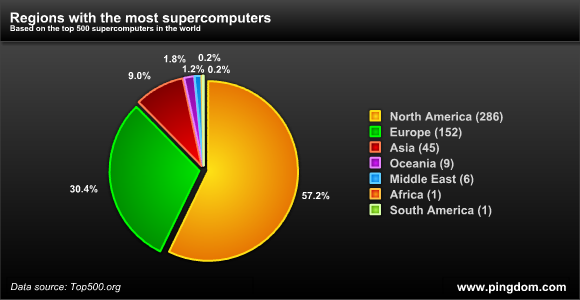 Nine of the eight supercomputers in Oceania are in New Zealand, one in Australia. Four of the supercomputers in the Middle East are in Saudi Arabia and the other two in Israel. The one in Africa is in South Africa while the South American one is in Brazil.

Here below you can see the division by operating system family across the top 500 supercomputers.
As you can see, Linux has close to 90% of the supercomputer market. Quite an impressive feat.It’s an area where it dominates almost completely. Windows, on the other hand, is only used by 1% (5 out of 500).

You might ask yourself where you go to buy one of these huge computer systems, and here you go, the top ten vendors of supercomputers (again, based on the top 500).
The remaining vendors make up 4.4% altogether.
It should be noted that although HP is the leader in terms of sheer quantity, IBM and Cray have the two fastest systems.
So, now you know who to speak to if you want a supercomputer… All you need now is a very big wallet, a huge room, and one heck of a power supply.

Supercomputers are used for a ton of different purposes, often scientific in nature. They are for example a valuable resource to many universities. As we have shown here they are spread all over the world, albeit with a heavy bias towards the United States and Europe.
However, these stats show that the supercomputing hotbed is definitely the United States. The fact that the country has more than half of the top 500 supercomputers in the world, and eight of the ten fastest, is made all the more impressive when you consider that the United States only account for less than 4.5% of the world population and 13% of the internet users.