World’s cheapest laptop: Made in INDIA 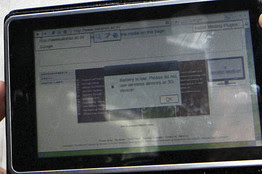 First the Tata’s “NANO” caught the world’s attention and appreciation as the world’s cheapest car.Now, India is all set to bring the world’s cheapest laptop into the markets early in 2011. Guess the cost of this laptop? It’s 35$ or 1,500`. Getting into the details, as part of the rural education mission, an initiative by government of India, hopes will put millions of Indians in front of a keyboard.

“This is real, tangible and we will take it forward,” Kapil Sibal, minister for human resource development, said at a press conference in New Delhi. The touch screen tablet will cost about $35, or 1,500 rupees, when it hits markets by early 2011.

The device was developed by students and professors at India’s premier technological institutes, using open-source programming, according to the Associated Press. The Indian Institute of Technology in Kanpur, Mumbai, Chennai and Kharagpur and the Indian Institute of Science in Bangalore researched it in collaboration with the government-operated National Mission on Education.

The National Mission on Education is working to spread connectivity to India’s universities and colleges.
Ms. Varma said the ministry has also made open invitation to national and global manufacturers to improve upon the prototype unveiled Thursday. “If more innovations will emerge, the cost of the gadget might be further reduced to $20 or $10,” she said.

The yet-to-be-named device, which has the look of an iPad, has the option of charging by a sleek solar panel. It will have features including an Internet browser, a multimedia player, search able PDF reader, video conferencing ability and wi-fi connectivity. It is supported by a two-watt backup source for places where power supply may be poor. It also comes with a small, 2-gigabyte memory but no hard disk.
Posted by Karthik