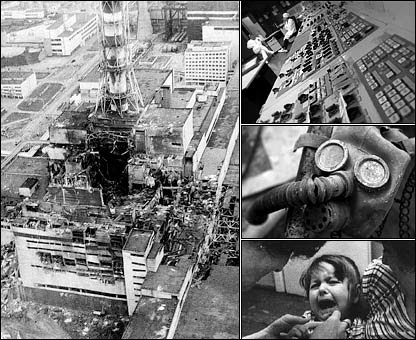 It is one of the world's deadliest nuclear disaster, raised many eye brows and questions about the nuclear programs as such. Chernobyl, Russia will be remembered in history as a core point of the whole nuclear crisis. This April 26th would mark the 25 years since the world has seen a deadliest nuclear disaster. So, what had actually happened on that day in Chernobyl?

Early hours of 26th April, one of the four power reactors exploded. Russia wasn't quick enough to realise what was going on. While the increased radiation was detected in the other countries. Claims of people loosing lives swirled, just adding to the heat of the situation. Here is quick look at the things that lead to worlds deadliest nuclear disaster.

What led to the accident?
It was a routine test to check whether the cooling pump still  function from the power generated from the reactor under low power should the auxiliary power supply fail.

At 2300:  Engineers lowered the control rods which reduce the chain reaction. This move was to reduce the output by 20% which is required for the test. But, too many rods were lowered resulting in drastic decline of the power output, resulting in almost complete shut down.

At 0100: In order to increase power , engineers began to raise the rods.And decision was taken to carry on with the test. But, the power was still at 7% making the engineers to raise more rods.
Automatic shut down was disabled to run the test in low power conditions.

At 0123 : As control rods were raised power has raised to 12%, test began.Seconds later, power levels suddenly stooped to alarming levels.

The reactor begin to overheat and coolant(water) began to turn into steam. There is a speculation that all but 6 control rods were raised. While the minimum safer number was 30.
Realizing the potential danger, EMERGENCY shutdown button was pressed. This reinserted the control rods
into the reactor core. But, this reinsertion displaced the coolant and concentrated reactivity in the lower core.

With the power roughly 100 times the normal, fuel pellets in the core began to explode. Eventually rupturing the fuel channels.

At 0124: There were two explosions blowing off the dome shaped roof. The Chernobyl reactor had no outer covering like many other reactors in the world. The building sustained severe damage and large amount of radioactive debris began to escape into the atmosphere.
As the roof was blown off, air was sucked inside the core, it ignited flammable carbon monoxide causing a reactor fire, which burned for 9 days.
Fire fighters rushed to the place, dropping sand and water from helicopters so as to contain the radiation leak.

IMPACT
The disaster released 100 times more radiation than the atom bombs dropped on Hiroshima and Nagasaki.
Much of the fall out was concentrated around Chernobyl, in parts of Belarus, Ukraine and UK. Every country in the northern hemisphere found radioactivity in the atmosphere.

The obvious impact was seen in increase of thyroid cancer. About 4000 cases were seen in then children and adolescents. Green peace says around 60,000 were cases of disease among 270,000 cases of all cancer.