Reliving India's road to victory in the world cup 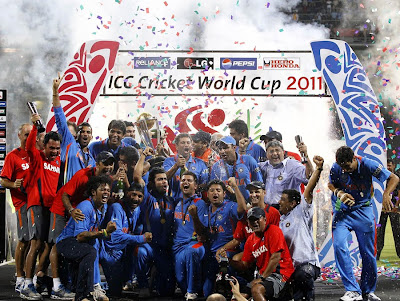 I had a peculiar expression on my face and also on my mind, openers who were striking the ball on meat of the bat were involved in a blizzard run out. I just turned to my friend and gave him a thought. I was not too sure about the understanding between SACHIN & SEWHAG, who are or rather should be the best opening pair in the prestigious CRICKET WORLD CUP 2011, India being top on list of favourites.
And my next suspicion came when Bangladesh were cruising through the hurdle of 340 odd runs India made. Fielding were pretty average batsmen could easily pick runs. However it was nice to see India pulling on with match. Dhoni going for DRS, on last ball of the 50th over, with a sarcastic smile gave me a feel if he was taking things too lite. Though I was on winning side, things don't seem convincing to me.

This is a guest post from Satya Saketh
Couple of other matches like AUS-ZIM & ENG-NED too gave me an impression that India should have played better with ball and on Field. Zim almost gave Aus a stroke or two and England survived ten Doeschate brilliance with bat. Ryan ten Doeschate produced a scintillating 119 from 110 balls, and followed up with the brilliant bowling figures of 2 for 47 in ten overs, to give England one of the biggest frights. Ireland also had proven that they were not among those teams which would surrender so easily.This made me think again and again if win against Bangladesh was convincing enough.

Then came IND-ENG, which was the first match that India and its supporters were too keen on. The openers and couple of batsmen shown why they were quoted so dangerous. Sachin was seen in top form, those back to back sixes that he hit of swann gave pushed the English away mentally. But, not holding the licence to go during the power play shown oppositions a clear picture of batting line up, its pro & cons. Match ended up in a tie, fielders and people handling the ball were responsible for this, but terrible batting came to bowlers rescue. Dhoni and yuvi were again obsessed with DRS system, which almost could end the match in a different zone.

Next two matches, with Holland and Ireland, India managed to float through the waters, but the way they managed things gave me second thoughts on betting my money on team India. It was also the time when every critic had opinion swift. India was also quoted not to be favourites anymore. On the other hand, teams like Pakistan,New Zealand were putting their hand up, as if someone asked them if they needed a place in semis. It was a time when something stuck me hard. I had a feeling if this was the team i was counting upon.

But, there was a silent engine that was igniting which was not given much importance till later stages of the World Cup. It was the YUVI effect. He was among the run getter's and whats more important was he was giving India crucial break through with ball. He looked calm,composed and what was most appealing was his grace in the field. He was just the old Yuvi who brought victories with his fielding efforts. He was back to his original fielding position 'THE POINT'. And also not to forget Zak, who produced a wicket every time he was give the ball.

With fair bit of criticism, India took on South Africa. This was supposed to be one of the biggest clashes that were scheduled in WC 2011. Sachin-Sewhag pair has proven why they were arguably the best opening combo. Styne-Morkel attack was the best attack that any team had this season. But,probably for the first time Smith had to pull off both of these bowlers from attack as India reaches 87 from 10 overs,which was best score scored in entire tournament.Sachin was on top of every ball that was bowled at him. But the batting worries continued. The licence to kill during the power play has misfired terribly once again.Though the fielding standards were risen, the match was lost in the last over.And again,because of the batsmen, bowlers share of criticism was minimal.

This was the time, all permutations and combinations were made to find who play whom in the quarters.Also there was a worry of India getting knocked out of the cup with some sort of calculation. I again told to myself, if a team need to win the title of champions, they should never be in a position where in they get qualified, based on points scored by oppositions. And to me India had to beat west Indies, so that i could cherish the entry of India into the second stage of the World Cup. I was till not happy with way things went on. May be it is because India was quoted to be favourites. Next match was won by India & we ended up second in the group. This match brought fair amount of confidence in all cricket lovers as Yuvi, who was fighting for a place in the side, scored a ton and helped India win with comfort.

Then came the big match with the mighty Aussies. It was India who way back in 2007-2008 began to quake through the empire Australia built in on the cricket field. There was a master stroke form all three departments of Indian team. Bowling was on the stumps, fielding was breath taking and batting gave many more surprises to the opposition. It looked very simple and calm as Yuv iPonting's dominance over the cricketing nations was over and India started to reach the summit of mountain that they have started to climb way back in 2008.

Indian fielding deserves a para on this blog. Surly, Raina,Kholi,Yuvi,Gambhir were at peak of their fielding skills. It was no wonder that Sachin could aim at stumps form the boundary line.


This was mother of all battles around the planet. India versus Pakistan in the world cup semi finals. What better moment could there be for media to get better ratings,for politicians to divert the attention of charges on them and for common public to show their patriotic feeling. Again India had control of all the three departments of the match . Sachin was among runs but not with getting dropped for 5 times, which was a disaster as far as Afridhi was concern. Yuvi was again among wicket takers. But the skipper was not firing at all. There was not even a 50 from this guy.

Getting into finals was not at all surprising to most of the people who follow cricket from close quarters. After all, India's performance was at peak for quite some time now. This was the perfect moment for a win and to bring back the cup back home after 28 years. Again fielding was top class. Srilanka is considered to be a better fielding unit. But, India has out classed them in the finals with some outstanding performance in ground fielding department.Bowling was good but it lacked the punch they carried earlier. The batsmen showed what is it to be a champion side. I was spell bond to see the resistance shown by Kholi-Gambir pair in the finals after those two early wickets. This was a sign of showing the world how to deal with the best of the team in the league. Skipper might have thought this was the time for him to pull up his socks.


He made sintillatin 91 along with gambir who missed out on a world cup hundred, more so in a finals. It all ended up with the tread mark helicopter shot from Dhoni's willow over the long off. Probably he kept this performance of his in store for the perfect movement.


The author is Satya saketh