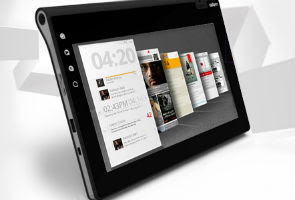 India's first home-made tablet is up for grabs again, after being sold out the first time round. Bangalore-based Notion Ink have started taking orders for 'Adam', which they claim was sold out after they started shipping in January 2011. Signing up for a tablet is through a tedious registration process and it does not guarantee you a tablet it as Notion Ink reserves the right of refusal and will decide who to sell Adam to.

First showcased at CES 2010 (Consumer Electronics Show 2010), the tablet has been an object of interest and criticism because of its Eden UI. It was one of the first tablets to feature the Pixel Qi display and was hailed by experts as the thing to watch-out for. But, the company has still not been able to launch its products in quantities that are enough to make a mark.

NVidia's Tegra 250 Dual-Core processor clocking at 1Ghz powers the Adam alongside 1GB of RAM, 10.1 Pixel Qi display with multi-touch support and a resolution of 1024x600, 8 GB of flash memory, a micoSD card slot, a 3.2 megapixel swivel camera and multiple ports including a full sized USB port.

For all the new buyers the company will ship an upgraded version of the 'Eden UI', which has now hit version 1.5. The Adam originally was released with Google's Android 2.2 Froyo operating system but now the company claims that they are working on an Android Gingerbread version, which will eventually be upgraded, to Android 3.0 Honeycomb.
Posted by Unknown