Home » technology » K is the new fastest supercomputer from Fujitsu

K is the new fastest supercomputer from Fujitsu 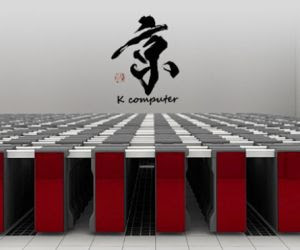 K here it is more than just alphabet. K is the name of the fastest supercomputer developed by fujitsu. How fast? It is faster than the previous world top supercomputer Tianhe-1A. K has dethrone this Chinese supercomputer. K is 3 times faster than its Chinese counterpart.The top-ranked beast is more powerful than the next five supercomputers combined, consumes enough electricity to power about 10,000 homes for a full year, and is capable of churning out about 8.2 quadrillion calculations per second -- three times as many as what runner-up (and former number-one) Tianhe-1A can process.


This is the first time that a Japanese computer has taken the title since 2004, although four of the top five machines today are either Japanese or Chinese.  While the 2008 winner from Los Alamos National Laboratory in New Mexico has already dropped to 10th place on the list, one can’t help but think K may hold onto the top spot for a little longer.
Posted by Karthik