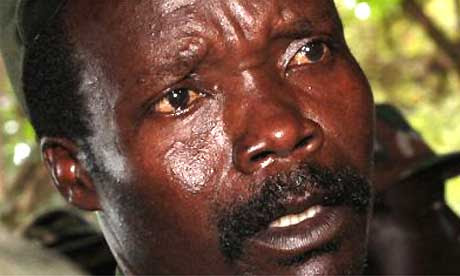 Kony 2012-an initiative by Invisible Children aimed at making Joseph Kony a famous personality. Not to celebrate him but to explain the world about his atrocities and force his arrest the only way to do it is make him famous and let people talk about his atrocities. So the next question is who is this Joseph Kony? What has he done?

Joseph Kony, born and brought up in Uganda has waged a war in central Africa for more than two decades. He is the head of Lord's Resistance Army whose primary aim is to govern uganda on the basis of 10 commandments. Initially, LRA enjoyed peoples support but gradually when kony began to torture his supporters people distanced them selves. LRA began to abduct young children of UGANDA. Boy's were trained in arms and battle while girls were made sex slaves. This has resulted in the wide spread fear among the people. But no government was able to take action against this psychopath. His crimes doesn't stop there he forced the abducted children to kill their own parents and amputate their body parts in the name of PURIFYING the world.

As said earlier KONY 2012 is aimed at making him famous and to force his arrest. I've done my part! What are you waiting for?